LONG ISLAND, NY, September 17, 2017 – Children’s Hope India’s teen leadership group, CH3, held its annual walk-a-thon on Sunday, September 17th at Eisenhower Park where they raised a record amount of money to send underprivileged children from local Long Island shelters to summer camp.  The event, which was organized and led by the teens, began with a dance warm-up by Namrata Baja of bnbdancyny, was followed by the 5K walk, and ended with a raffle drawing and donation to a local food pantry.  DJ Sharad, with MC Gino Carpio, livened up the already festive mood, thanks to the enthusiasm of the nearly one hundred attendees and the beautiful weather.  Legislator Rose Marie Walker (Legislative District #17) attended the CH3 event to lend her continued support to the organization.  Advantage Testing of Long Island and DNP Enterprises sponsored the backpack give-away, Pinnacle College Consultants sponsored the water bottles, and seven local businesses and individuals sponsored mile markers throughout the 5K course: Jeannie Fontana, Sachin & Babi Ahluwalia, Method Test Prep, David Casale, Liggette & Webb PA, Compass Rose, and Rekha Advani.  Altogether, the event raised approximately $10,000. 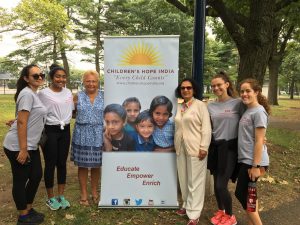 CH3, which was formed in 2014 when six enthusiastic teenagers came together to try to make a difference, had a modest goal in their first year of sending two children to summer camp. The success of CH3 has subsequently enabled the organization to support the enrollment of 34 children over the course of four summers.  Now, with the success of last Sunday, the teens will be able to sponsor even more children to attend The Young People’s Day Camp.

Children’s Hope India is a volunteer organization of Indian women professionals in New York that has been raising funds for children’s health and education since 1992. Guided by the principle that “every child counts,” CHI’s mission is to give underprivileged children a chance for a brighter future. Now in its landmark 25th year, CHI supports over 20 projects across several major cities in India and the New York Metropolitan area, reaching out to over 250,000 children.

CH3 is the next generation of philanthropic leaders! With a mandate of “children helping children” and armed with new ideas and an awareness of global issues, CH3 wants to give back and share this consciousness with their peers and local communities.

Read more on the Walk-a-thon at The Island Now.